Workout of the Day

Yes, the track is the greatest venue for WODs like Daniel. So here it comes!

We are expecting a very special guest form Ohio, John Lovins, who will be offering a self defense clinic this Sunday at the box. We can’t wait to meet you John! 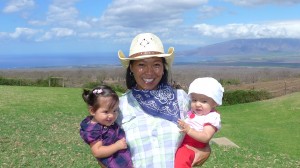 Nova started working out with us just when she got pregnant with her second child.  She continued to workout through her pregnancy and had baby Sydney in January. She came back to the box in March.  We all took turns holding “Squeaky” while Nova got her WOD in.  Nova’s oldest boy, Chase is now 3 and Sydney is 7 months old.  Nova shared this with us yesterday” “I can now fit into my pre-pregnancy jeans. I still have some more toning up to do, but that will come after I’m done nursing. I can deadlift as much as my husband (185 lbs x 3!) and I have more strength and energy to chase around two kids. Crossfit has given me a sense of community outside of being a full time mother. This has created balance in my life. The women are amazing, the energy is infectious. I love coming to Crossfit everyday and I look forward to challenging wod’s. I have many crossfit goals to accomplish, including learning to kip and do double unders.”

We love you Nova!

Warm up as on the white board.

Strength: Deadlift.  If you are ready to use the excel format on your own, let me know! It’s very easy and very cool! Otherwise, follow the chart in your folder.

5 deadlifts (weight depending on which week you are on, etc.)

First off, a big congrats to our CrossFit UpCountry chick, Andrea, who competed in the Strong Woman contest this past weekend.  Had I not been swimming with the dolphin, jumping off 40′ cliffs or doing WODs on the most beautiful beaches of Lanai, I would have been there cheering for her.  Andrea did GREAT! She simply didn’t even know her own strength before this. The other local CrossFit contender is someone we all know and love, Kehau! I heard today that Kehau pretty much dominated the entire competition which wasn’t a real surprise to me.  We are so excited for the both of you! My sympathies to those contenders who expected to do better. It sounded like an incredibly challenging event! 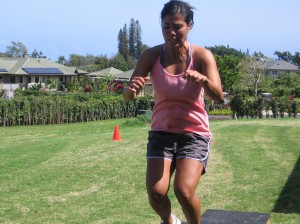 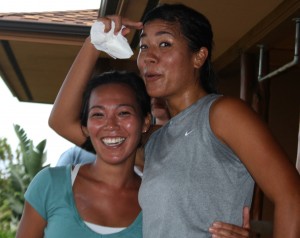 Keahu long ago, before she was famous! Shown here with Nova.

However, if I had been on island I probably would have either raced or supported the event that I have long been involved in since the day I moved to Maui, The Cycle to The Sun. This is the most grueling race in the nation. The race starts in Paia at sea level and ends at the summit of Haleakala crater, 36 miles and 10,023′ later.  I have done that race many times. This year a good friend of mine who is new to cycling finished top Maui male in under three and a half hours. Way to go Alf! Just think how much he will improve when he starts the CrossFit programming.  Many of his competitors still train the old way. Long, long, long, sometimes hard, sometimes very hard rides, but little to no strength training or all out super short anaerobic repeats. Cyclists believe they can’t add muscle or it will slow them down. And many still believe carbohydrates are the best way to fuel their bodies before, during and after a race.  Sign them up!